The prefix Trans means crossing over a boundary; in this case, the boundary of being human.

It’s a philosophy or ideology that aims to control and transform the human species to a higher state using bio technologies, in order to eliminate suffering, disease, aging and death because those are considered mankind’s enemy. This ideology is based on secular humanism- the belief that the tangible world is the only thing that is real; an atheistic religion. Ethically, it adheres to Consequentialism, meaning the end justifies the means, as opposed to Principalism (what modern medicine is based upon), that is, decisions should be made based on the values of respect of persons, informed consent, doing no harm and upholding justice.

One of Transhumanism’s proponents says “If we want to live in paradise, we will have to engineer it ourselves. If we want eternal life, then we will have to rewrite our flawed genetic code and become godlike.”1. Our cultures take on Transhumanism includes: Frankenstein (a scientist creates life in the form of a murdering monster who hates himself and his creator), Gattica (nongenetically enhanced people are inferior, not deserving to live), Marvel Hero’s (Captain America is a genetically modified super soldier, but his purpose is geared toward war between enemies).

Genetic Engineering: We’ve already seen the first genetically engineered humans, twins born in China in 2019. I was there in Hong Kong, at the 2nd International Genome Editing Conference, when Dr. He Jiankui shocked the world by announcing his unethical and illegal research. The DNA manipulation done to those babies was completely unnecessary, and ended up changing dozens of their genes, not just the one that was targeted. We have no idea what long term price Dr. He’s ambition will have on the health of these girls. A positive use of gene editing would be to therapeutically help cure diseases in children or adults, and medical research is doing just that- example: sickle cell anemia. 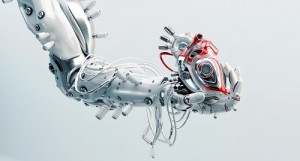 Brain-Computer Interfaces, Robotics and Cybernetics, Nanotechnology: Moderna, the company that makes one of our mRNA COVID vaccines using nanotechnology, has been a long term contractor for biodefense with our Pentagon. As a part of DARPA (defense advanced research project agency) they develop mRNA therapeutics and gene editing that aim to give our armies an edge over our adversaries. DARPA includes soldier enhancement using robotics, with brain-to-human computer interface, almost like a real life Iron Man. Examples in use today are exoskeletons for strength and protection, and bionic limbs to replace injured ones.

On the positive side, some transhumanistic genetic research is specifically aimed to change or eliminate the genes responsible for cancer, diabetes and Alzheimer’s.  On the darker side, the goal of much governmental military research is to create super humans, specifically targeting the genes responsible for larger muscles, higher intelligence, lowering the need for sleep, and increasing the ability to stay underwater longer. Harvard geneticist Dr. George Church is currently experimenting with age reversal in dogs using gene editing that has shown success previously in mice. He is one of hundreds whose research is trying to significantly lengthen if not eliminate the notion of a natural lifespan. One of many problems facing a transhumanistic society is it will create great disparity between the elite who can pay to be “upgraded” and those who cannot. Transhumanism’s goal, if realized, would be destructive and dehumanizing rather than transcendent.

These new technologies should be used ethically for therapeutic purposes and healing, not enhancement of the human race, which is a kind of eugenics ideology where we choose who deserves to live and survive. Aging and death are not the enemy but are to be embraced as a natural part of a life well lived.