NCER Comments: Inherited chronic inflammation in the gastrointestinal tract is referred to as Crohn’s disease. Drug therapy only scratches the surface of the pain it inflicts. However, there is new hope! Researchers have used the patients own stem cells to substantially reduced symptoms.

Stem cell therapy may be a viable new treatment option for Crohn’s Disease. Studies have shown that stem cells may be able to greatly improve patient symptoms without the exorbitant recurring costs of traditional medications.

What are the symptoms of Crohn’s Disease?

The most common symptoms that are associated with Crohn’s Disease are usually stomach pain and diarrhea. Over the course of years, the condition can be characterized by flare-ups and periods of unpredictable remission. Other symptoms of Crohn’s Disease may include:

Is there a cure for Crohn’s?

Unlike ulcerative colitis, a similar inflammatory bowel disease, Crohn’s disease has no surgical cure. However the symptoms of Crohn’s can be managed with new Crohn’s medication, which may include; immunosuppressives, antibiotics, antidiarrheal, or corticosteroids. Stem cell therapy may also be a viable treatment option for those suffering from Crohn’s, mainly due to the treatment’s ability to target and alleviate inflammation, the underlying symptom of the condition.

The cause of Crohn’s Disease is currently unknown, it is currently believed that both environmental and genetic factors may play a role in the development of the disease. According to J Ghazi, et al. Studies have found compelling evidence for an inheritable risk for the development of Crohn disease. However, classic Mendelian inheritance is not seen. Most of the genes thought to be involved in the development of the disease play a role in mucosal immunity, and their products are found on the mucosal barrier epithelium. It is thought that Crohn’s Disease is caused by the chronic inflammation from T-cell activation leading to tissue injury within the gastrointestinal tract.‍

Inflammation is prevalent in disorders ranging from heart disease and diabetes to IBD and Crohn’s Disease. Treatment of these diseases, as well as many other common conditions, usually addresses the reduction of inflammation in the body. Whether through drugs, diet and lifestyle changes, or other natural methods, the goal is to eliminate as much inflammation from the body as possible. ‍

Researchers have shown over the years that Mesenchymal Stem Cells (MSCs) are one of the strongest anti-inflammatory tools available today and many patients are turning to stem cell therapy to meet their needs.‍

T-cell activation within the gastrointestinal tract leads the body to conduct an immune response leading to chronic inflammation causing pain and discomfort. Mesenchymal Stem Cells (MSCs) have the inherent ability to target inflammation within the body and repair damaged tissue. This potentially makes a large stem cell transplant an effective treatment for inflammatory conditions such as Crohn’s Disease. ‍

75% [3/4] of the patients had complete clinical fistula closure after 4 years, as determined by the absence of discharge. MRI evaluation after 4 years showed an improvement in the fistula tracts in 67% [6/9] of MSC treated patients [Figure 1]. We have shown that the efficacy of local bmMSC therapy for perianal Crohn’s disease fistulas was maintained for up to 4 years after treatment. 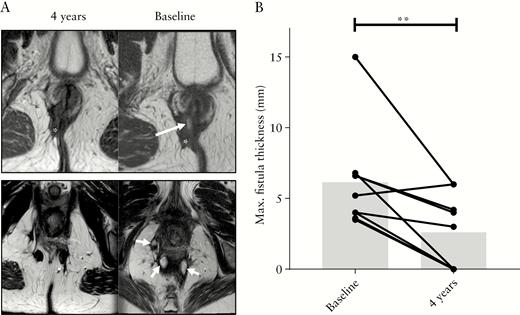 Mesenchymal Stem Cells may have the ability to treat Inflammatory Bowel Disease according to a study conducted by Shimizu, et al.

MSCs have been reported to have an immunosuppressive effect by polarizing anti-inflammatory M2 macrophages and reducing both dendritic cells and neutrophils through prostaglandin E2 (PGE2) and IL-10 at the wound site. MSCs can also reduce the activity of T lymphocytes and B lymphocytes by modulating their proliferation and differentiation. There have been several phase I/II clinical studies for both autologous and allogeneic MSC transplantation (MSCT). In this trial, 53% of patients had clinical remission, and endoscopic improvement was observed in 47% of patients at 42 days after transplantation.‍

The study concluded that Stem cell-based therapy is one of the promising new treatment options for refractory IBD patients, making mesenchymal stem cell therapy and exciting new treatment option for patients with chronic inflammation within the digestive tract. One may argue that these findings may be able to transfer over to Crohn’s disease patients, as a reduction in inflammation may decrease symptoms and lower the chance of further flare-ups. Barnhoorn, et al. concluded that stem cell therapy for Crohn’s disease in the long-term, is a safe therapy. Mesenchymal stem cells also have a strong immunomodulatory effect, meaning they can prevent the immune system from mistakenly responding to incorrect threats. This can reduce negative immune responses in patients with Autoimmune conditions. ‍

In February, 2020 DVC Stem conducted a Crohn’s case study with impressive results. This study presented a 25-year old Caucasian American woman previously diagnosed with Crohn’s Disease and having a history of postural orthostatic tachycardia syndrome (POTS), as well as adrenal, thyroid, and anemia issues. She had been living largely without these indications until 2011 when her condition worsened, prompting medical intervention. She reported low energy, frequent bowel movement, bloody diarrhoea, abdominal pain, and cramps. She was prescribed Decedron 0.75mg and a Remicade infusion (TNF Alpha blocker) for inflammation, as well as medications for diarrhoea, nausea, and reflux. She was also using the narcotic Norco for pain management. The patient reported not being able to function day to day, having quit school due to her ailments.

Pre-treatment lab work was conducted to determine baseline condition. The required labs include inflammation markers to document any abnormally high levels of inflammation that would be expected with Crohn’s patients. Her bloodwork indicated a TNF Alpha of 8.3 (normal range 0.0-2.2). The patient also completed a vitality questionnaire which determined her subjective condition across 24 different overall health metrics for comparison post-treatment.

The patient did not have significant changes in blood pressure, blood oxygen level, or body temperature during treatment. She did not report any adverse responses within 24 hours of her treatment date.

Three months post-treatment the patient reported significant improvement of symptoms. During a follow up physical exam, she reported a complete reversal of her bowel and abdominal pain symptoms. Her post-treatment vitality questionnaire indicated a 95% improvement in bowel movements, abdominal discomfort, and blood per rectum, as well as a 70% improvement in energy level. Her bowel movements had decreased from 12 to 15 per day to 1 per day, and blood per rectum from 8 to 10 per day to zero. She reported that she had not taken Dacedron since her treatment, without any adverse effect. She had sustained higher levels of energy, and reported that she had begun attending school once again to pursue higher education, which was not possible prior to treatment. ‍

What is DVC Stem?

At DVC Stem, we have been using stem cell treatments to improve health and comfort for over 10 years. We follow the highest standard, respecting safety & innovation in the delivery and evolution of regenerative and protective medicine. DVC Stem is a state of the art medical center that is fully licensed by the Cayman Islands Government. Our mission is to alleviate symptoms and halt disease progression. ‍

DVC Stem uses cord tissue-derived mesenchymal stem cells ethically sourced, AATB certified, US-donated, full-term human umbilical cords. We administer over 300 million cells that are all thoroughly tested for viability before treatment. These cells are NOT a blood product, therefore, it is extremely safe and does not require HLA or phenotypic matching.

Dr. Cona has been performing stem cell therapy for over 10 years. He is a member of the World Academy of Anti-Aging Medicine (WAAAM). He is also a recognized member of the British Medical Association, the General Medical Council (UK), the Caribbean College of Family Physicians, and the American Academy of Family Physicians. He is the Medical Director for DVC Stem a world-renowned stem cell therapy clinic located in Grand Cayman.