NCER Comments: One in 14 people over the age of 65 have Alzheimer’s disease. This translates to 5.7 M in the US alone. There is no cure, only drug therapies that may lose their efficacy within months. Plaques are sticky deposits that build up in the brain and prevent communication between brain cells, leading to cognitive impairment. But three new protein, antibody and drug breakthroughs are on the cusp of changing everything.

by Mark Dallas, The Conversation

Although around one in 14 people over 65 have Alzheimer’s disease, there’s still no cure, and no way to prevent the disease from progressing. But a recent study may bring us one step closer to preventing Alzheimer’s. The trial, which was conducted on animals, has found a specific molecule can prevent the buildup of a toxic protein known to cause Alzheimer’s in the brain. 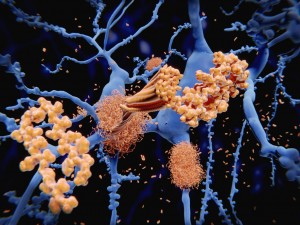 Since 1906, researchers have known that amyloid plaques are one cause of Alzheimer’s disease. These plaques are stubborn and sticky deposits that build up in our brains and contain a protein called beta-amyloid. This protein has been the focus of many studies, and we have learned a lot about what it does and how it causes nerve cells to die.

Beta-amyloid first attacks the communication networks between our nerve cells (called synapses) and then suffocates the nerve cells. This amyloid induced nerve cell damage is what contributes to the symptoms of Alzheimer’s disease. Currently, there’s no medicine that can alter the amount of amyloid plaque that accumulates in the brain, or prevent this buildup from happening.

Beta-amyloid comes from a protein called the amyloid precursor protein (APP), which resides throughout our bodies—not just in our brains. The APP family of proteins are involved in a host of biological functions, from making other proteins to controlling communication between nerve cells.

However, when bigger APP molecules are split by the body into smaller fragments, they can take two paths. One of these routes is not linked to disease, while the other route has been shown to elevate levels of beta-amyloid. If we look at the pathway that leads to Alzheimer’s disease, scientists have identified an enzyme known as gamma secretase as a key player in converting APP into beta-amyloid.

Scientists have spent a long time trying to target gamma secretase to stop the sticky build up of beta-amyloid that makes plaques. But despite this insight, our efforts to inhibit the actions of gamma secretase have largely failed, with some trials indicating that inhibition can increase the rate of decline in brain function.

However, a recent study took a different approach from those in the past. Instead of aiming to shut down gamma secretase, they instead looked to dial down its activity. To do this, the researchers needed to generate new molecules that would change the activity of gamma secretase and offer protection against beta-amyloid deposits from building up in the brain.

The team generated three compounds of interest as they worked at very low concentrations—something which is vital for making new medicine. The researchers then looked to take one of these compounds forward and test it in an animal model of Alzheimer’s disease.

To do this, they used mice that had been altered to generate more beta-amyloid—thus displaying some of the signs of Alzheimer’s disease. The mice were treated for three months with a daily administration of the compound. The result was a reduction in the amount of beta-amyloid in the brain by half. Although other studies have produced similar outcomes in animal models, the results of this study are significant because this compound could not only be used to treat dementia, but to prevent it.

They also noticed other changes in the brains of mice treated with this molecule. The molecule dampened the reaction of the brain’s immune cells, the microglia. Although these cells are important for brain health, they can also be harmful when over-activated—which is what happens with Alzheimer’s disease. This shows the benefits of the drug could be two-fold.

The next step in bringing this compound to people living with dementia is to carry out clinical trials to validate the lab findings. This is often the point at which the laboratory work fails to live up to its promise.

Although the researchers have done a lot of research to give this compound a chance of succeeding, the success rate for drugs targeting our brain is around 6%. Previous gamma secretase modulators have not progressed to become medicines because of adverse effects reported by participants.

But the molecule trialed in this study has the advantage of being more potent, which ultimately leads to less of the molecule being needed to have an effect on the users. If it were to enter clinical trials, researchers would be looking for a variety of outcomes to prove a positive result, such as whether it improves a person’s memory test performance. Trials are also likely to involve brain scans to monitor structural changes and track beta-amyloid deposits in the brain.

The signs are positive for this molecule to go forward but the transition from lab to clinic has seen many molecules fail to live up to expectations. It does, however, add another molecule for trial, which is needed as researchers continue to seek for relief for people living with Alzheimer’s, and those that are awaiting a diagnosis.

This article is republished from The Conversation under a Creative Commons license. Read the original article.