We are now one step closer to designer babies. Using a technique called CRISPR, geneticists in China recently modified the DNA of nonviable human embryos and published the results in the journal Protein & Cell.

With the CRISPR-Cas system, scientists just made a giant leap toward genetic engineering humans — but there’s still a lot of work to be done. Thorsten Schmitt/Shutterstock

Editing the genetic material of human embryos was a first — and the April 18 publication of the results set off a cascade of awe and controversy.

“While these embryos will not be growing up into genetically modified people,” science journalist Carl Zimmer wrote in National Geographic, “I suspect this week will go down as a pivotal moment in the history of medicine.”

Some observers highlighted the potential upsides of this type of DNA modification. One cell researcher told Forbes that CRISPR technology might someday help people “suffering from blood diseases like Beta thalassemia and leukemia, [since they] could have their blood cells’ DNA fixed.” Others suggested CRISPR could help tackle infectious diseases, “possibly providing a way to make more specific antibiotics that target only disease-causing bacterial strains while sparing beneficial bacteria,” according to Ekaterina Pak, a Harvard PhD student.

Paul Knoepfler, an associate professor at UC Davis School of Medicine, says CRISPR makes him feel like a “kid in a candy store.” He can run genetic engineering experiments faster and more cheaply than he ever could before, and can use the technology to better understand the causes of disease.

Critics, however, worry that the CRISPR experiment on human embryos brought us one step closer to a Gattaca-like dystopia involving mass human engineering. Still others fretted about safety and wondered whether ethical boundaries were being crossed.

Since you’ll almost certainly be hearing a lot more about CRISPR in the months and years to come, here are some basic facts to keep in mind:

CRISPR is a technique to “perform microsurgery on genes”

Nowadays, the term CRISPR is used to refer to a technique to edit DNA. It’s cheaper, faster, and more precise than other forms of genetic editing.

But how does it actually work? It all came about once scientists discovered how the immune systems of certain bacteria work. Some bacterial cells contain clusters of DNA known as CRISPRs (the acronym stands for “clustered regularly interspaced short palindromic repeats”). And in recent years, scientists realized that these sequences work in an ingenious way.

As George Church, a Harvard geneticist, explained over email, they act as the immune system for some bacteria. “Bacteria have protected themselves since the dawn of life by using molecular machines nicknamed CRISPR to keep DNA chunks of old viral enemies, and later use these chunks to guide the slashing of incoming viral DNA — if these bad guys are foolish enough to return.”

So whenever viruses attack a bacterial cell, these CRISPR clusters take parts of the invading viral DNA sequences and store them, saving them for use as a road map to help future generations of bacteria defend against these viruses. The bacteria then destroy the virus using an enzyme called Cas-9 that slices up the virus’s DNA. 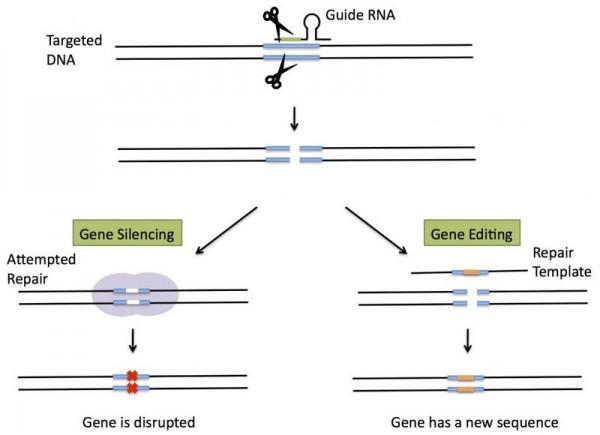 Gene silencing and targeting with CRISPR. (Science in the News, Harvard)

This blueprint of attack then gets passed down from generation to generation — so that future bacterial cells can respond quickly if they get attacked by the same virus. “By having the CRISPR/Cas-9 system in place — and the memory sequences from viral infections of the past — the bacterial cell can quickly neutralize the virus,” explains Knoepfler.

It wasn’t until the last decade that scientists figured out how this all worked — and once they did, they realized they could use CRISPRs and Cas-9 enzymes to edit the genes of other organisms.

Take, for instance, a human cell. While these cells don’t have CRISPRs, researchers can essentially deliver a customized CRISPR into the cell to direct the Cas-9 enzymes to carry out a specific DNA-editing task. “We can put in artificial DNA sequences that will tell the Cas-9 to go to a mutated gene that causes Huntington’s disease or cystic fibrosis, and we can direct that Cas-9 enzyme to correct or erase that mutation that causes the disease and make it the normal healthy sequence,” Knoepfler added.

In 2007, researchers learned how to harness CRISPR to protect yogurt bacteria. By 2012, researchers began experimenting with this technique in test tubes. By the next year, scientists around the world were using the technique to manipulate the genetic material of various animals, from mice to zebrafish.

The new study on human embryos revealed some pitfalls of CRISPR

Then came the big news. On April 18, 2015, scientists at the Sun Yat-sen University in China published a dramatic new study in the journal Protein & Cell. They had used CRISPR to edit the DNA of ‘nonviable’ embryos (that is, embryos that couldn’t develop into humans).

Their goal? To use CRISPR to replace a gene in the embryo that is known to cause a serious, genetic blood disorder called beta thalassaemia. In other words, they were trying to wipe out the inherited disease from the human embryo.

The researchers were able to inject 86 embryos with the enzyme complex CRISPR/Cas 9 — which can target the troublesome gene in question and allow it to be replaced or repaired. Only 71 embryos survived the experiment, and only a small fraction of those survivors were successfully modified with the new genetic material. So the success rate was quite low.

In his report on the study, Zimmer argued that the experiment revealed two huge potential pitfalls with the editing process:

One is the fact that CRISPR sometimes missed its target and inserted DNA in the wrong places. Such a misfire wouldn’t just fail to fix a disease like beta-thalassemia. It could create a disease of its own.

The other big problem is that the embryos that did get edited correctly were actually a mix of edited cells and unedited cells — what’s known as a mosaic. Mosaics can give doctors a lot of headaches, as I’ve written in the New York Times. If fertility doctors used CRISPR to create healthy, hemophilia-free embryos, they’d need to make sure the embryos were repaired by picking off a cell and examining it up close. A cell from a mosaic embryo could give doctors the wrong picture of the embryo as a whole.

The authors of the Protein & Cell paper were cautious about their findings, warning that the technology wasn’t yet ready for human use. Instead, they suggested that their research had demonstrated big obstacles that lay in the way before CRISPR could be used for medical applications.

“I believe this is the first report of CRISPR/Cas9 applied to human pre-implantation embryos and as such the study is a landmark, as well as a cautionary tale,” George Daley, a stem cell biologist at Harvard Medical School in Boston, summed up for Nature. “Their study should be a stern warning to any practitioner who thinks the technology is ready for testing to eradicate disease genes.”

So this experiment is more likely to spur further research in the field and discussion — rather than convince scientists that CRISPR is fatally flawed.

“Just because [the human embryo] experiment came out poorly doesn’t mean that future experiments will,” Zimmer wrote. “There’s nothing in this study that’s a conceptual deal-breaker for CRISPR.”

He then drew a parallel with cloning, which had many early failures — including developing animals with genetic health issues. “Cloning is much better now, and it’s even getting to be a business in the world of livestock and pets. We still don’t clone people, though — not because we can’t, but because we choose not to. We may need to make the same choice about editing embryos before too long.”

There are still serious social and ethical issues related to CRISPR

Still, the CRISPR experiment was not without controversy. In fact, the one study alone will probably keep bioethicists busy for some time. After publication of the study on human embryos, news emerged that the journals Science and Nature had rejected the research because of ethical concerns around modifying the DNA of would-be humans. “Both journals keep details of their review processes confidential,” Nature News reported, “but acknowledge that gene-editing of human embryos is a complicated issue for them.”

There are a few major caveats. First: the safety issues. “The stakes are enormous . . . a human baby,” wrote Stanford’s Hank Greely, who specializes in the ethical and social implications of new biomedical technologies.

“THE STAKES ARE ENORMOUS . . . A HUMAN BABY”“You’d have to be criminally reckless, or insane, to try to make a baby this way unless and until we’ve had a decade or more of preliminary research, with human tissues and with non-human animals (including certainly primates and maybe even some of the non-human apes), showing that it is safe. If the moral risk isn’t enough of a deterrent, the potential legal liability should be.”

The National Institutes of Health’s Francis Collins was more pointed with his concerns about the ethics of human gene editing — particularly the question of whether we are ready to make new human babies who have no say over having their DNA altered.

“The concept of altering the human germline in embryos for clinical purposes has been debated over many years from many different perspectives, and has been viewed almost universally as a line that should not be crossed,” he wrote in a statement. That’s because of “serious and unquantifiable safety issues, ethical issues presented by altering the germline in a way that affects the next generation without their consent, and a current lack of compelling medical applications justifying the use of CRISPR/Cas9 in embryos.”

So even if the application of CRISPR to humans is an exciting possibility, there are many problems to be worked out — both with the technology and the ethics of human use. This means that though we might be one step closer to Gattaca, we’re still a long way off from that dystopia.

“Sometimes,” said Knoepfler, “the CRISPR/Cas-9 system is not perfect. It might go and make a mistake somewhere else in the genome. It might go in there with the intent to fix a problem — correct a mutated gene — and you don’t know if you introduced a new problem elsewhere by making a mistake in the genome.”

“It’s such a powerful technology,” he added. “But it’s not perfect.”